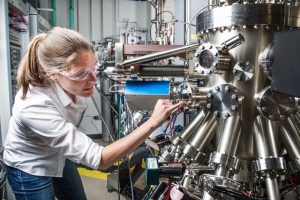 The Future of Nanotechnology is You

Any conversation about Nanotechnology most often starts with a definition to help people understand this up-and-coming technology. The dictionary states nano is minute, small, or tiny. Some consider it “molecular manufacturing.” Many scientists explain it as the study, design, and application (or making/manufacturing) of tiny things you can only see in a microscope.

A nanometer (nm) is one-billionth of a meter, or one-millionth of a millimeter, which does not make it any easier to grasp just how small. We further explore “What Is Nanotechnology?” and provide current examples, research, and a useful YouTube video in a Think Small blog post to make it easier to understand.

Nanotechnology is often considered one of the “converging technologies.” That means its study often happens in combination with another scientific area. It is a new and highly interdisciplinary field of STEM, embracing concepts from: Chemistry, Physics, Biology, Mathematics, Material Science, Engineering, and Computer Science.

Transistors, one of the building blocks of electronics and the smartphone you likely have in your pocket, are a perfect example of things that keep getting smaller. Only 75 years ago, the first transistor was invented in AT & T Bell Laboratories. In the early 2000s, the average transistor was around 200 nm. That dropped to 14 nm in 2014, then 7 nm in 2015, and all the way down to 1 nm in 2016 as the Lawrence Berkeley National Lab (one of our Industry Partners) created a 1 nm transistor, the world’s smallest.

To help put a nanometer into perspective, a sheet of newspaper is about 100,000 nanometers thick, but if you did not have the entire piece of paper to look at it would be hard to see. A strand of human DNA is 2.5 nanometers thick. One nanometer is 10 hydrogen atoms lined up in a row. Not visible to the naked eye.

That 200nm transistor? You definitely need an electron microscope and in biological terms that transistor would be the size of a protein or virus cell. We can see bacteria, animal cells, and human cells with a regular light microscope; all under 100 micrometers (and that’s 100,000 nanometers). The human eye can often see a human cell (100 micrometers/100,000 nanometers) without a microscope, in the right conditions.

Here are a few more key terms that you may have heard and wondered what they mean. This list of nano definitions is courtesy of a much larger list of terms from the Nano.gov Glossary.

Atomic force microscope – A scientific instrument that can generate images of nanoscale details on a physical surface by scanning a tiny, flexible ceramic or semiconductor probe just above the surface—where it will be attracted or repelled slightly by features on the surface, and the deflection can be detected with the laser.

Atomic layer deposition (ALD) – A technique developed in the 1970s for depositing monolayers of material in a sequential, controlled manner using self-limiting reactions. It is used to make thin films.

Monolayer – A layer, film, or coating that is only one atom or molecule thick.

Nanocomposite – A material composed of two or more substances, of which at least one has a nanoscale dimension, such as nanoparticles dispersed throughout another solid material.

Nanocrystals – also known as nanoscale semiconductor crystals. "Nanocrystals are aggregates of anywhere from a few hundred to tens of thousands of atoms that combine into a crystalline form of matter known as a "cluster." Typically around ten nanometers in diameter, nanocrystals are larger than molecules but smaller than bulk solids and therefore frequently exhibit physical and chemical properties somewhere in between. Given that a nanocrystal is virtually all surface and no interior, its properties can vary considerably as the crystal grows in size." (Credit: Berkeley Lab)

Nanofluidics – Science or engineering involving the flow of liquid or gas through nanoscale spaces.

Nanoporous – Substances that have holes or pores on the nanoscale, used, for example, to separate particles or molecules by size.

Nanotube – Hollow, cylindrical structures, with a diameter usually less than 5 nanometers. They are often but not necessarily, composed of carbon, and having remarkable strength and electrical properties.

Photolithography – A fabrication technique that utilizes light to etch patterns onto silicon wafers using a mask and light-sensitive resin. It is often used for making integrated circuits.

Scanning tunneling microscope – A scientific instrument that can make images of nanoscale details on an electrically conductive surface by moving a sharp metal probe very close to that surface, passing a low-voltage electric current across it, and measuring tiny fluctuations in the current as the probe is scanned across the surface.

Vapor deposition – A chemical process commonly used in the semiconductor industry to apply thin films of one substance onto a surface composed of another substance.

YouTube Video about How Nanotechnology Can Change Your Life.